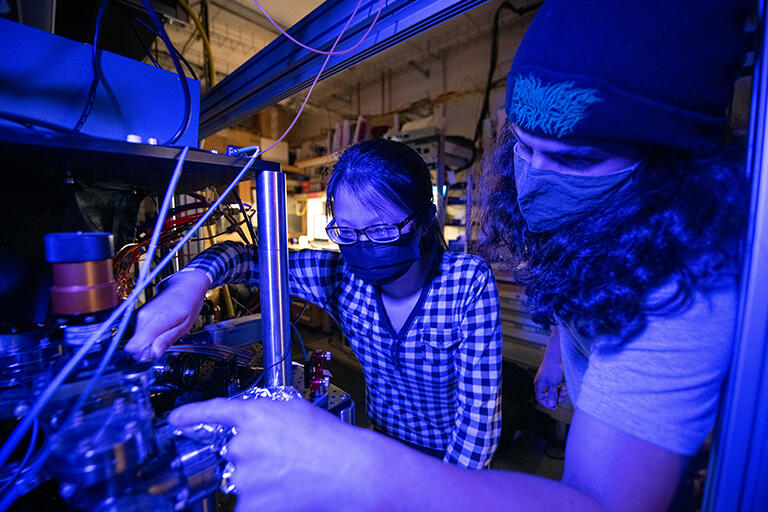 The Berkley Physics Innovators Initiative (Pi2) is the department’s new vision for modernizing, streamlining, and strengthening the path students follow as they pursue their undergraduate careers. An important component, says faculty member Feng Wang, is the Pi2 Summer Scholars Program, in which undergraduates can participate in a research project with their graduate student and faculty mentors.

“The idea is to give students an immersive research experience during the summer,” Wang says. Mentoring is an important part of the process, he says, allowing students to “really own a project that they can work on.”

There is an application and matching process, Wang says, which includes writing a research proposal. Undergraduate students in the department may apply for the eight-week Summer Scholars Program. Students accepted are paired with graduate mentors who provide guidance on conducting research in their area of interest and developing as a physicist. There is no more haphazard emailing by motivated undergrads, Wang says, who are trying to find a lab where they can get research experience.

“It was one of the things I looked at when I was deciding to come to Berkeley as a freshman,” says Troy Tsubota, who was a 2022 Pi2 Summer Scholar after his sophomore year. “It was in my head that this program existed, and it seemed pretty cool and exclusive to Berkeley students.”

Tsubota says that some of the projects that were open were with Professor Edgar Knobloch’s research group, which he learned about from a graduate student mentor in the Physics Department’s directed reading program. “It was sort of the natural next step for me to get into research. And I liked that. It seemed very accessible, even though I didn't have a lot of background.”

Pi2 Summer Scholar Howard Meng worked with Professor Mike Zaletel researching isometric tensor networks, which he describes as computer simulations of two-dimensional systems. He calls the work “super nice, because beforehand, we were only able to work with one dimension. That's not enough.”

Meng says because of the summer scholars’ program, “I found my passion is in doing research. I enjoy spending time trying to tackle a problem slowly. From my mentor, I learned that in grad school, they spend their entire year pretty much doing research. That is something that I foresee myself doing.”

The Pi2 Summer Scholars Program also supports scholars with a summer stipend, made possible by the generous support of Berkeley Physics alumni and friends. This successful program is expected to continue in the coming years.