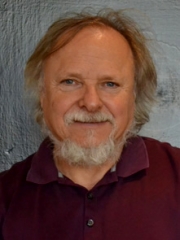 My research interests center on nonlinear dynamics of dissipative systems. These focus on bifurcation theory, particularly in systems with symmetries, transition to chaos in such systems, low- and high-dimensional behavior of continuous systems, including spatial localization, and the theory of nonlinear waves. Applications include pattern formation in fluid systems, reaction-diffusion systems, and related systems of importance in geophysics and astrophysics. I am also interested in the theory of turbulent transport and the theory of turbulence.

Complex dynamics due to broken symmetries: Even the loss of discrete symmetries can lead to unexpected behavior. For example, the fact that the Earth’s rotation breaks reflection symmetry in planes through the rotation axis is responsible for the pervasive drift of weather patterns. The origin of complex behavior due to forced symmetry breaking can be understood using group-theoretic techniques coupled to bifurcation theory.

When the resulting waves interact with spatial inhomogeneities novel dynamical phenomena result. These are associated with absolute instability and produce, for example, chaotic waves in one part of the domain that coexist with laminar waves in another, separated by a shock-like structure. Phenomena of this type are expected to have wide applicability to flows in rotating systems (including dynamo theory) or ones with through-flow and they appear to explain the break-up of spiral waves in certain chemical reactions.

Coupled nonlinear oscillator systems exhibit states called chimera states in which some of the oscillators oscillate in phase while the rest remain unsynchronized. In one-dimensional arrays such incoherent regions may be stationary or propagate. In two-dimensional arrays the coherent oscillators self-organize into a spiral wave around an incoherent core. These cores may move and execute complex dynamics.

Strongly nonlinear patterns: In fluid systems with strong restraints (for example rapidly rotating systems, or a strong imposed magnetic field) the flow in one or more directions is inhibited. As a result the motion is simplified and asymptotic techniques can be used to cast the pattern formation problem into the form of a nonlinear eigenvalue problem. In the case of convection the solution of this problem determines the heat flux across the fluid layer for a given applied temperature difference. This approach promises to be extremely useful in studies of geophysical and astrophysical flows which are almost always highly nonlinear, and has led to a simplified description of rapidly rotating turbulence that agrees well with full 3D simulations and experiments. These reduced equations describe the system in parameter regimes inaccessible to both direct numerical simulation and laboratory experiments but predict the emergence of large scale vortices and jets from a state of geostrophic turbulence, much as occurs in the Earth's atmosphere.

Parametric instabilities of vibrating flows: A fluid layer vibrated vertically breaks up into a pattern of surface waves. These waves interact with large scale flows which they themselves generate. A description of this interaction is a challenging task but promises to provide an explanation for the dynamics observed in a number of experiments both on this system and on vibrated soap films.

Crystallization from a supercooled liquid: continuum description using dynamical density functional theory or the phase field crystal model can be used
to understand the properties of crystallization fronts, the role of spatially localized structures in the equilibrium phase transition, and even the formation of quasicrystalline structures.

Wrinkling and buckling of elastic structures under compression also involves spatial localization and finds application in many areas of soft condensed matter physics.