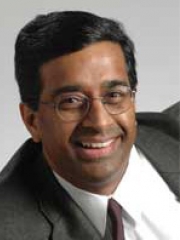 Current Projects
Professor Ramesh is known throughout the world for his contributions to the science and technology of complex functional oxide materials. Working initially in the early 1990’s at Bellcore, he made landmark contributions in ferroelectric perovskites through the recognition that conducting oxide electrodes are the solution to the problem of polarization fatigue, which for 30 years, remained an enigmatic, unsolved problem. This is now recognized worldwide: many industrial and academic research laboratories have implemented his approach and the first series of products based on the use of conducting oxide electrodes are hitting the marketplace. In 1994, in collaboration with S. Jin (Lucent Technologies), he initiated research into manganite thin films and they coined the term, Colossal Magnetoresistive (CMR) Oxides; the paper published in Science is the 4th highest cited paper (more than 2000 citations). This work was the starting point for an intense international R&D effort on these materials, with several promising approaches for new devices. He continues to pursue key scientific and technological problems in half metallic magnetic oxides within a framework of multicomponent oxide thin films and heterostructures. His work in this field has also led to the discovery of novel field effect devices that combine the properties of ferroelectric and magnetic perovskites. His current research activities encompass probing the physics of nanoscale phenomena in complex oxide heterostructures, multifunctional oxides, approaches to create self-assembled functional nanostructures, integration of complex oxides with semiconductor technologies, and the use of nanoscale scanned probes to understand fundamental properties and dynamics in such materials. His work is cited extensively (over 13000 citations), and he ranks among the Highly Cited Physicists around the world in the Physics Citation Index. He has been issued 26 patents with 1 more under consideration. He was honored by the International Symposium on Integrated Ferroelectrics with an Outstanding Achievement Award in 2000. In 2001, he was awarded the Humboldt Senior Scientist Prize by the Alexander von Humboldt Foundation, and Fellowship in the American Physical Society. He was recently appointed Distinguished University Professor, the highest academic honor at the University of Maryland (2003). In 2005, he was awarded the American Physical Society’s David Adler Lectureship.