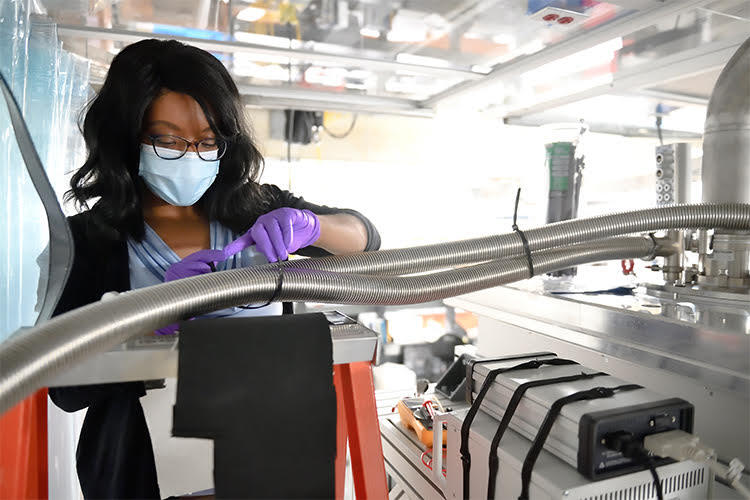 It’s year three of Danielle H. Speller’s search for answers to questions behind the so-called matter-antimatter asymmetry of the universe, as well as the search for dark matter. The Johns Hopkins University Assistant Professor of Physics explains that, based on the laws of physics, particles of matter and antimatter should be created in equal amounts. Should be. "So, if you had the same amount of matter and antimatter created in the same area of the universe, early on, you would have expected them to annihilate each other and what you’d be left with is energy," Speller explains. Instead, our world is made of protons, neutrons, and electrons rather than positrons, anti-neutrons, and anti-protons. "Pretty much everything is made out of matter," says Speller, an experimental nuclear and particle astrophysicist who received her PhD degree in 2017 in the Berkeley Physics Department. "We observe very little antimatter naturally in the nearby observable universe and so one of the questions we have is why that might be the case." Toward that end, Speller is a collaborator on such international physics research projects as Italy’s Cryogenic Underground Observatory for Rare Events (CUORE) and Yale University’s HAYSTAC (Haloscope at Yale Sensitive to Axion Cold dark matter) experiment, which is looking for a dark matter candidate called the axion. Her related graduate work at Berkeley included the Super Cryogenic Dark Matter Search (SuperCDMS) experiment. Speller says one of the reasons she chose Berkeley Physics for her graduate studies was her familiarity with the campus and the department’s research as an undergraduate intern at Lawrence Berkeley National Laboratory. "When I applied to graduate school, I tried to apply to places that I knew were doing really exciting research," she says. "The Berkeley graduate students I met seemed to be in a good place in terms of their interests and excitement about what they were doing."

And it was also a matter of prayer, Speller says. "I was really trying to figure out what direction I wanted to follow for research coming out of undergrad [at North Carolina State University]." She found her way at Berkeley Physics.