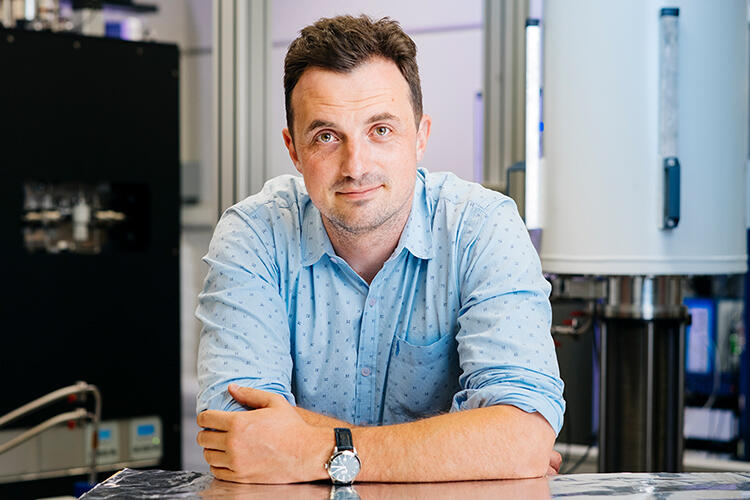 When a person slides into a magnetic resonance imaging (MRI) machine to obtain detailed internal images of their body, they’re in the middle of a giant, powerful, superconducting magnet.

MRI machines— incredibly valuable for diagnosing injury and disease— are only possible because of decades of basic research into these superconducting magnets. Today, however, there are still countless exotic superconductors that scientists don’t fully understand, but could have technological applications.

James Analytis, PhD, the Charles Kittel Chair in condensed matter physics at Berkeley, wants to reveal the atomic details of these kinds of materials. His work may, one day, lead to new kinds of MRI machines—or even supercomputers that encode data in entirely new ways.

“What ties my research together is it all starts with this very fundamental question of how do these weird novel superconductors work,” says Analytis, a 2021 Heising-Simons Faculty Fellow. “Once we understand that, we can optimize and manipulate these superconductors to create new devices. The ultimate technological goal is to try and have a superconductor that works at room temperature and that you can make thin wires out of.

Superconducting wires could translate to small, accessible MRI scanners around the world, or a much faster and more efficient power grid, among other applications.

A way to explain the world

Analytis, who grew up in New Zealand, always had a deep curiosity about the world around him. In college at the University of Canterbury he dabbled in physics, mathematics and philosophy — all fields that he felt offered elegant ways of describing nature at the simplest level. But he also wanted to make an impact. With physics, he thought, he would be able to both figure out how the world worked, and apply his findings to the development of new technologies.

As a Rhodes Scholar at the University of Oxford, Analytis narrowed down his interests to focus on superconductors. These materials can conduct electricity without energy loss, allowing electric currents to persist indefinitely and generate strong magnetic fields. However, existing superconductors can only achieve these properties at extremely cold temperatures, at least at normal pressures.

“What appealed to me about this field was that you have to be a jack-of-all-trades to tackle superconductors,” says Analytis. “You have to understand thermodynamics and the fundamental constituents of nature, and how particles interact. But you also can probe these materials with accessible, tabletop experiments in your own laboratory.”

Analytis, though, wasn’t entirely sure whether he wanted to start his own lab. It took two fellowships—first at the University of Bristol in the UK and then at Stanford—to get him hooked with the feeling of community that academic labs could convey.

“It suddenly felt like I was a part of something, this vibrant community of people working together to answer really deep and fundamental questions about the world,” he says. “And so one of the reasons I decided I did want to start my own lab was that I wanted to propagate that enthusiasm; I wanted my students to feel that excitement I felt.”

When a superconducting material is twisted into a coil—as is the case with an MRI machine—it creates a strong magnetic field. In the case of an MRI of a person’s body, the machine senses how quickly protons in the body align with the magnetic field, using that information to differentiate tissue types. But the same superconducting magnetism is useful in other technologies, including nuclear magnetic resonance (NMR) imaging, particle accelerators, and high-speed trains that levitate above the tracks, reducing friction.

In all these applications, the power of superconductivity comes from electrons’ spins— the way each electon rotates around its axis. One of the major focuses of Analytis’ lab is revealing how electrons’ spins interact with each other, how to leverage the spins to store data, and how to manipulate spins to create new kinds of superconductors that can work closer to room temperature.

In 2020, Analytis and colleagues developed a material known as intercalated transition metal dichalcogenide Fe1/3NbS2. Applying small currents of electricity to the material, the team showed, can flip the magnetic spins, letting them create a device that could read and write information within spins — a new kind of information storing device, albeit a very simple, proof-of-principle one.

“I was pretty proud of that because we were using very complex and unusual exotic materials to do something applied,” says Analytis.

The future of superconductors

Analytis says the back-and-forth between fundamental science questions and applications is not just a one-way street; the applied technology that his lab develops can then help probe basic questions.

“We can take all of the state-of-the-art nano-fabrication techniques and new understanding about how spins interact and then apply it to novel superconductors,” he says.

With the Heising-Simons Fellow award, for instance, his team is working on prototype devices that are meant only to demonstrate fundamental physics, testing how novel superconductors work and searching for materials with new properties.

Creating an ambient pressure, room temperature superconductor may still be far off, but Analytis has more immediate goals as well, like understanding superconductors that work at a few Kelvin above absolute zero—still very cold, but whose mechanism could give clues about how to design superconductors from their elemental components. “That would be transformative too,” he says.

Analytis remains motivated by this potential for transformation, and the diverse collaborations it takes to translate his basic research to applications.

“We collaborate with engineers and chemists and computer scientists,” he says. “They say variety is the spice of life; I certainly think it keeps my research very fun.”